The Centre is a crèche and pre-school for children from three months to six years. It was started over 25 years ago for families from the Philippi farming community and now also serves children from surrounding townships.

In South Africa only some 17 out of every 100 children have access to any sort of pre-school. This is a major factor as to why only half those entering the state education system either drop out or leave without any sort of recognizable qualification. The Centre provides a vital service to the community to give children a positive start in life. Babies as young as 3 months enjoy love and care in the crèche and begin learning through play.

At three years they move to the pre-school. Here they learn through play. Creativity is encouraged as well as more formal subjects such as reading, writing, numeracy and social skills. Mental and manual abilities are equally valued and fostered.

The step before Primary School

Ready to go – eager to learn. Children start state primary school when they turn seven in SA. It is vital that they are properly prepared.

Grade R (or reception) class is their last year at PCC. Here children are taught by highly qualified Grade R teachers. There is emphasis on skills such as reading, comprehension, numbering, understanding, and logical deduction. They must be socially ready, well mannered, able to take instructions and respect authority.

The Grade R programme at Philippi Children’s Centre has proved so popular with parents that in 2014 a second class had to be opened to cope with the demand. Even so, there is still a waiting list.

At the end of their time at the Philippi Children’s Centre, the Grade R learners have a graduation ceremony when they receive their certificates. It is a proud day for the children, their families and the staff

Philippi Children’s Centre was started in 1992 for children of farm workers. It has grown and takes in children from the nearby townships and other areas. Our children include those who are challenged, either mentally or physically. Sadly some have fetal alcohol syndrome. This is caused by the mother drinking alcohol during pregnancy. There is no cure but skilled help at an early age aids behavioral problems.

Parenting classes are also held and the Centre reaches out to the wider community.

In 1999 the Centre became an NPO (non profit organization).

The Centre is proud of its high standards. It offers real education, not just a child minding service. Children hear three languages – English, Afrikaans and Xhosa.

It has developed into a flagship pre-school for township and rural children and has become a resource and training centre to uplift other crèches and pre-schools in the area.

Teachers celebrating our 21st anniversary in 2013

An American donor, Love to Langa, has sponsored a covered training pool so that young children in the Philippi area can learn to swim – both those at PCC and also from the wider community. Philippi is a farming area and every year there are tragic accidents when youngsters are tempted to swim in the dams and get into trouble. The swimming programme is run by Headstart, a well known Cape Town swim school, with South Africa certified learn-to-swim instructors.

Children at PCC are offered weekly lessons for R100/month, heavily subsidized by Headstart. Sadly, even this small amount is beyond the means of some parents, so PCC is looking for sponsors. Outside school hours lessons are available to the general public (but at more commercial rates) so that even more people can benefit from the generosity of Love to Langa. There are very few pools in the Philippi area. PCC does not know of another not-for-profit pre-school hereabouts that has such a facility. 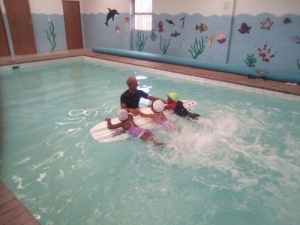 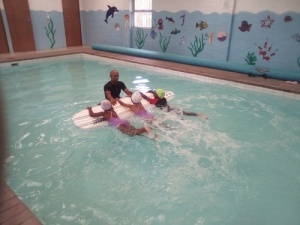 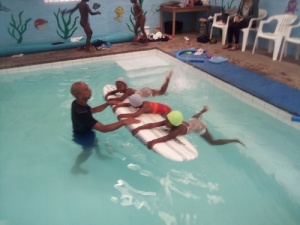 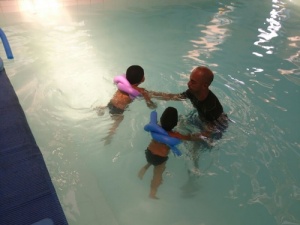 A hungry child is unable to learn. Brain and physical development are most active in the first years of life so poor nutrition will affect the rest of the life. The Centre provides three meals at day – breakfast, lunch and an afternoon snack. For some children, this food is their main source of nourishment. Reading is the key to education. The Stories for Africa children’s library (sponsored by overseas and South African donors) provides access to 3000 books (donated by Ojai Valley Kindergarten in America).

Philippi is a rural area and most children do not live within walking distance of the Centre. There is little public transport. A school bus is a vital part of the help we provide. 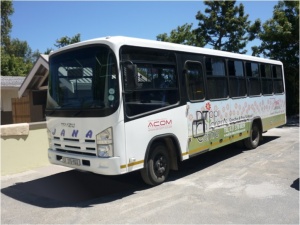 Our caretaker grows vegetables for the school kitchen in a food tent.

Philippi is a mainly rural area, it grows a large proportion of Cape Town’s vegetables. Many agriculture workers live on the farms. In recent years there has been a huge growth in townships (informal settlements) and development in light industry.

Many people are disadvantaged. Unemployment is high. There is a high level of alcohol abuse and some areas have a culture of gangs. Education is the only way for people to lift themselves and their children out of these problems.

Most of our parents are from the previously disadvantaged community. They themselves had poor education, most are in low paid manual work or are unemployed. Their housing is poor. They have little chance of bettering themselves but so many are passionate about giving their children a brighter future.

• In South Africa only 17 out of every 100 children have access to pre-school
• Only 43 out of every 100 children who start school actually write matriculation at age 16-18 (matriculation is the SA school leaving exam at age 17)
• 40% of South African children do not achieve basic literacy and numeracy
• 15% of children from poor communities suffer from Fetal Alcohol Syndrome and there are some 2 million South Africans currently affected. FAS is an irreversible condition caused by the mother drinking during pregnancy. It can not be reversed but good teaching can mitigate the effects.

The trend can be reversed!